skip to main | skip to sidebar

Subject: THE 5 MINUTE CHOCOLATE CAKE FOR ONE PERSON.......HOW NEAT

When this email came in I thought ... hmm. Better try it. Here are the results, followed by the recipe and conclusions. 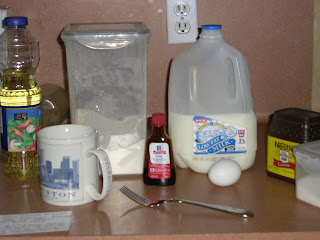 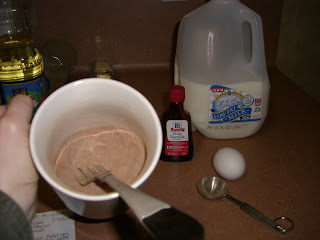 Mug (I used 18oz Starbucks mug in hopes of having less of a mess if the thing exploded) with the dry ingredients thoroughly mixed together. 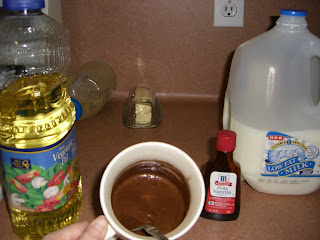 Added egg to the dry ingredients and mixed it in really well. 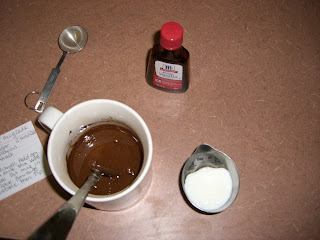 The oil is in (still on top of egg/dry ingredient mix) and the milk is measured out. 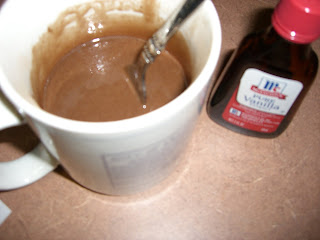 The oil and milk have been mixed through the egg mixture thoroughly. This takes a little work but my fork did well. 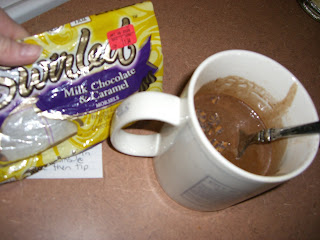 The vanilla is in the mug and I added a few chocolate/caramel chips as well. Spent a minute or two mixing it up well. 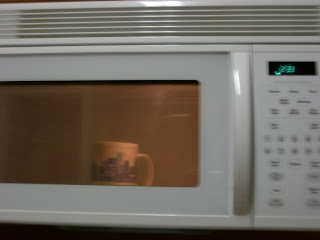 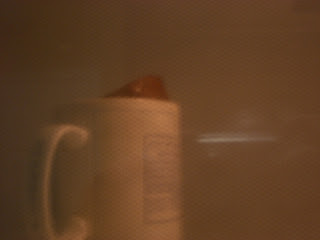 As the cake "baked" it rose slightly over the lip of the mug but (thankfully) there was no mess involved. 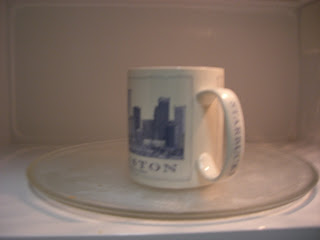 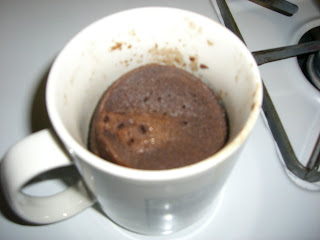 Fresh out of microwave. 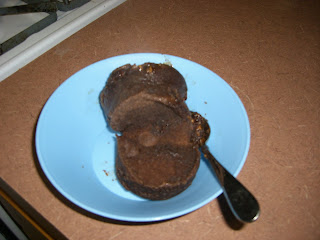 CAKE! The process did, indeed, make a cake. 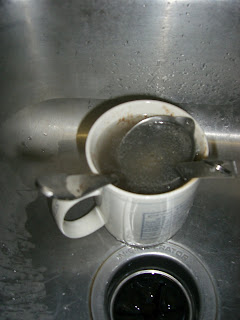 Entire extent of mess. Nice. David would tell you I don't like messes.

Pour in the milk and oil and mix well.

Add the chocolate chips (if using) and vanilla extract, and mix again.
Put your mug in the microwave and cook for 3 minutes at 1000 watts.

The cake will rise over the top of the mug, but don't be alarmed!

Allow to cool a little, and tip out onto a plate if desired.
EAT ! (this can serve 2 if you want to feel slightly more virtuous).

The Process: Simple, mess free and doesn't require the use of a conventional oven (a HUGE positive in Houston, TX)

The Result: As expected the cake is quite dense and chewy. There is no leavening agent (ie - baking soda, salt, baking powder or yeast) which is the cause of such a thick texture. The flavor is really good, very chocolately and not overly sweet. The chips, added prior to the microwaving, sank to the bottom but did add a nice flavor.

The Clean-up: A snap!! One mug, one fork, one TBSP measure and you're done.

What I would do differently: I did this recipe exactly to specifications above. I think next time I will try a small amount of leavening, such as a pinch of salt, to make the cake less dense. Also, I would put the chips on top of the cake after it comes out of the microwave and allow the steam to melt them while the cake cools. Or I will dust with powdered sugar after it's cool.


Having tried this made me wonder how much was on the internet about such things as microwavable cakes. Surprisingly, there's a lot. I never would have thought to have tried such a thing. While a microwaved cake won't replace an oven baked, light and fluffy cake with frosting - this such cake will be perfect in the middle of the summer when we are craving something sweet but don't want to heat the whole house with the oven. I stumbled on another blog with a similear recipe and further ideas for ingredient swapping (http://bakingbites.com/2008/07/microwave-chocolate-cake-for-one/) that I found interesting and would probably consider trying a few of her suggestions as well.

Happy microwaving!
Posted by David and Becca W at 4:03 PM

I just tried this - it didn't look as pretty as yours but is tasty (especially with the glaze I poured over it ;-) I added a little bit of salt and baking power but it still turned out rather dense and a little goey - that may be due to the mug I choose (the only clean one!) I think it's a poor heat conduit - also my microwave may not operate on 1000 watts....still, it beats a salad! HA! Hope you're not too soaked in down there.

David and Becca W
We were married March 05,2005 in Seattle, WA. We moved rather frequently in our first few years, then settled outside of Houston, TX. We are thrilled to be relocating and putting down roots in the great NW in late June 2012!

Have I Met Them? No. But I Read Their Blogs Anyway.