skip to main | skip to sidebar

To Christmas, New Years and Beyond.....

A belated Merry Christmas from Hubs, the "kids" and me. We stayed in town this year as we have the previous two. David and I went to our friends house to celebrate with a large, corn free meal 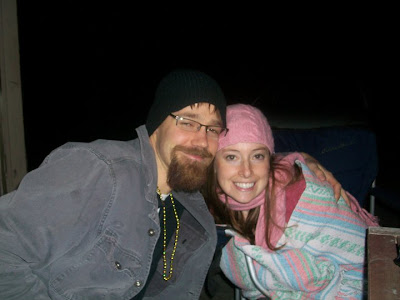 . This is the 3rd year we have celebrated with this couple and their two children and the 2nd corn free Cmas. This year we were unable to find a corn free ham so I cooked an 11 pound turkey. With 4 adults and 2 small kids we had plenty of leftovers.

David and I both had the week between Christmas and New Years off of work so we spent a lot of time lounging about and decompressing after a stressful year.

New Years Eve found us at the home of another friend. About 10.30p I called it quits - time for bed - but our neighbors were out when we arrived home and we ended up visiting with them until mid-night. The first New Years Eve we have stayed up for in several years. *Picture taken by our neighbor Brooke right about midnight on New Years Eve/New Years Day*

2011 brings the end of 6 years of marriage and pushes us into the 7th! We celebrate 6 years in March and are thankful for them. In April I officially turn 30. The big three-oh. I have been saying "I'm about 30" for three years or so now so it's not a big deal. Of course I anticipate saying "I'm about 30" for the next ten years or so as well. David and I hope to take a trip of sorts to mark the 6 years of marriage and 30 years of life - we'll see if we can fit it in. David is expected to travel more this year as his employer anticipates a higher job volume (thankfully) and I have accepted a position with a company to start mid-March.

David and Becca W
We were married March 05,2005 in Seattle, WA. We moved rather frequently in our first few years, then settled outside of Houston, TX. We are thrilled to be relocating and putting down roots in the great NW in late June 2012!

Have I Met Them? No. But I Read Their Blogs Anyway.